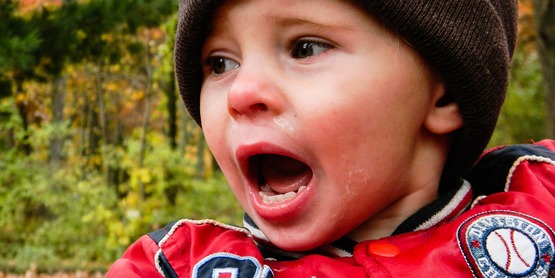 The first time you hear a six-year-old or ten-year-old let loose with a whole string of unacceptable words, it can be quite a shock! While inappropriate language is more evident with school-age children, even pre-schoolers repeat objectionable words they may hear.

When children swear, parents often feel distressed or angry. Parents who never or rarely swear themselves blame television, their child's friends and other adults for influencing their child's language. Even parents who often use profane language wish that children would not follow their example.

Here are some things you can do to keep those "four-letter words" under control.

Let children know that swearing is not acceptable, that you don't like it and will not permit it. If kids understand that bad language is not allowed, they will be less likely to use it. In setting rules, it is important to discuss why the rule is needed.

Give yourself and the child a cooling-off period before you attempt to deal with the language. For example, you may say, "We both need a break before we can talk about or deal with this."

The above examples show how important it is to teach children alternatives to using inappropriate language. However, this teaching takes time. And some children will need the added incentive of consequences to help them inhibit the use of the forbidden words. It is important to choose consequences carefully and to use them sparingly. The consequence should be reasonable and carefully tied to the behavior.

If a child uses bad language around other children, the child may need to play alone for fifteen minutes. If a child continually swears while completing a project, she may need to put the project away until the next day. When children swear to shock or upset parents, parents can send them out of the room until they can use acceptable language -- or leave the room themselves. Children who continually use words to shock the teachers may need to tell their parents what words they said.

Try having the children set their own consequences. You will probably have to tone them down a bit -- it's not reasonable to stay out of an activity for a week! However, young people are more likely to accept consequences they have established for themselves.

"Four-letter words" are common during the school years and sometimes during the pre-school years. By understanding why they are used and by using appropriate guidance and discipline techniques, you can help to eliminate their use.