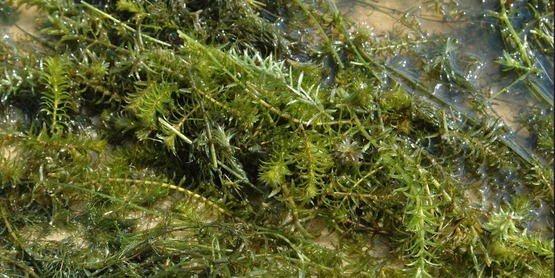 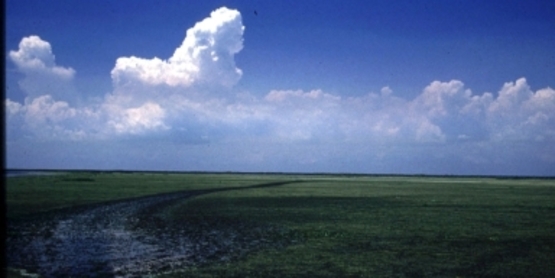 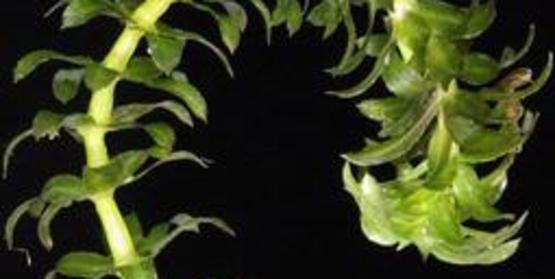 The highly invasive aquatic plant, Hydrilla verticillata, commonly known as 'hydrilla' or 'water thyme' was found in the Cayuga Inlet in 2011. The biotype that was found in the inlet is native to southeast Asia and was brought to the United States through the aquarium trade. Hydrilla was first found in the wild in Florida in the 1950's. It has since spread to many parts of the US. We will never know how hydrilla arrived in the Cayuga Inlet, but it was probably spread by a boater or someone dumping an aquarium irresponsibly.

Hydrilla was often used in aquariums for many of the same reasons it makes for such an invasive pest. It is extremely hardy and can grow in many conditions (including low light levels and poor nutrient areas). Hydrilla can spread quickly since fragments of the plant can sprout roots and establish new populations. Fragments are easily caught and transported by boats and boat trailers, and can be dispersed by wind and water currents. Hydrilla also reproduces and spreads by buds produced along the stems (called turions), or overwintering tubers. Rarely does hydrilla flower and set seed.

Hydrilla grows aggressively, up to a foot a day.1 Early in the season, it grows horizontally along the bottom of the waterbody. Side shoots and new tubers can develop at the nodes as the plant grows. As the water temperature increases, the stems elongate, sending the shoot tips toward the water surface, creating a thick mat of vegetation. It quickly shades out other aquatic plants, displacing beneficial native species like pondweeds and wild celery.

Hydrilla has long slender stems that can grow underwater to lengths of up to 25 feet. Its identifying characteristics are displayed to the right.

Hydrilla is easily confused with a native water weed, Elodea Canadensis, whose leaves typically occur in whorls of three and appear smooth‐edged. Hydrilla in the Cayuga Inlet typically has leaves in whorls of five with toothed (serrated) edges.

It also resembles the invasive Brazillian waterweed (Egeria densa), which is found downstate in New York and has finely serrated leaves (3/4 ‐ 1.5 inches) in whorls of 3 to 6. View image of hydrilla and look-alikes, that is other water plants that look similar to hydrilla.

1. Glomski, L.A. and M.D. Netherland. 2011. Does Hydrilla Grow an Inch Per Day? Journal of Aquatic Plant Management. (click to go to full report)

Both images below can be clicked on for a larger view.

Usually has four to eight small, pointed leaves arranged in circular whorls along the length of its stem.

The edges of the leaves are lined with sharp teeth.

The dioecious has female flowering plants and originated in Southern India. It was often used in aquariums and probably dumped in Miami and Tampa in the 1950s. From there it has spread and is found in much of the Southern US.

Monecious hydrilla is thought to have originated in Korea and was introduced in the US decades later then the dioecious strand in the Potomac Basin and now spans north from South Carolina.

View a map of hydrilla throughout the United States.

Hydrilla verticillata is found on the USDA's Federal Noxious Weed List and is regulated by strict permits.

It is illegal to sell/buy hydrilla. However, many sales occur due to misidentification of the plant and/or contamination of legal sales. Being that it looks a great deal like elodea, which is commonly sold as an aquarium plant as well, people sometimes mistake one plant for the other and mis-lable it, or, a stray piece of hydrilla will get packed along with a shipment of elodea.