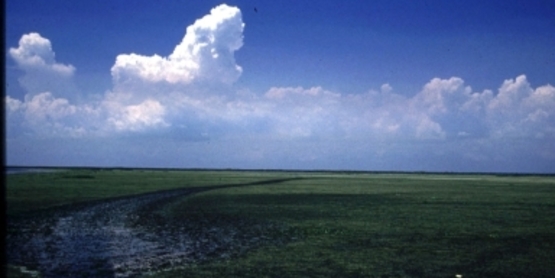 Hydrilla poses a serious threat to the ecological health of the areas it infests. It can tolerate lower light conditions than most aquatic plant species, which allows it to begin photosynthesizing earlier in the morning than other aquatic species, giving it an advantage. Hydrilla also has an advantage over other plant species because it spreads so efficiently through both tubers and turions. Also, there are no native predators that eat hydrilla, and so their growth is not checked.

These adaptations allow hydrilla to out-compete other plants for space to grow. As hydrilla can double its biomass every two weeks during the summer, and can fill the entire water column up to 20 feet deep, it creates a monoculture- a term used to describe areas dominated by a single species, as opposed to a regular ecosystem that contains many species. Monocultures can be harmful when they limit the ability of animals in the area to find food or habitat, and when the dominating plant does not allow other, native plants to grow.

Although hydrilla can provide habitat for fish, it unbalances the predator-prey relationships of some fish. Some predator fish (like sunfish and bass) attack their prey by ambushing them, and benefit from the additional cover provided by hydrilla. However, this can lead to a decrease in their prey and to fish that prefer open waters, and even the fish that prefer cover eventually cannot hunt when hydrilla becomes too dense.

Bird populations are affected by declines in fish population, and can also be harmed by toxic blue-green algae that grows on hydrilla leaves.

The International Plant Protection Convention's Aquatic Plants Their Uses and Risks highlights hydrilla on page 41, its impacts on page 55, and recommendations for dealing with pest species on page 60.